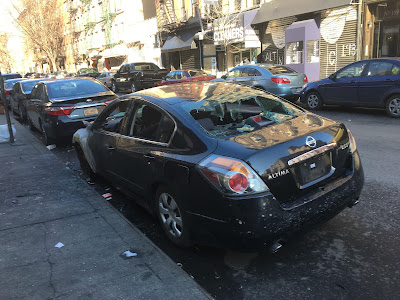 Several readers mentioned a small fire that started late Wednesday night on Third Street at Avenue B... one reader said some kids (youth!) were lighting a box of saturn missiles (celebrating the last day of January?)... that ignited the garbage bags on the curb... and this Nissan Altima was the collateral damage. The FDNY quickly put out the flames. The car, now without license plates, remains on Third Street... 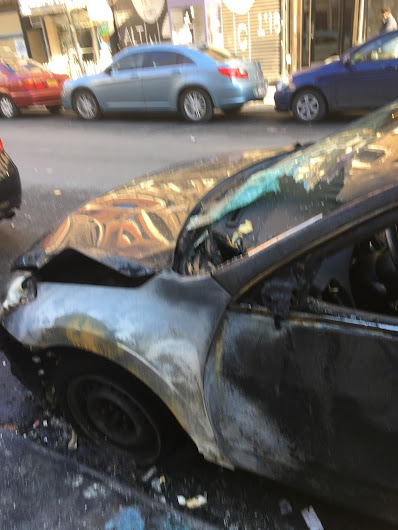 Terrible but look on the bright side, at least the car didn't explode.

Continuing on the bright side, we get to re-live old school New York, when the streets were littered with abandoned cars.

Those kids need to pay for the property damage.

There goes a claim on insurance and lots and lots of inconvenience.

Ah. I remember back in the late 70s early 80s fireworks were already illegal in NYC (can't be trusted, dontcha know!).

But there was always someone who had a creepy uncle or knew some other such sketchy character who would sell some bottle rockets, M80s and sundries from the trunk of their prematurely rusty Malaise-Era bloat-mobile or basement apartment. Only requirement was a few bucks, a brown paper bag and some discretion.

That was Queens though. And the local cop/fireman population certainly had no scruples about setting off confiscated "contraband" when the occasion suited.

Chinatown seemed to evade scrutiny until the Guilliani years before which it had benefited from... "benign neglect"...

@PJ - The firecrackers in Chinatown were to ward off evil spirits. Giuliani cracked down and now the neighborhood is overrun with them.

Yes, I know the Chinatown fireworks have a religious significance and I remember the (justifiable) uproar when Rudy snuffed that tradition out. Which I'm surprised even he was able to do...

I lived on Forsyth St in the late 1980s. Bottle-rocket firefights between groups of Puerto Rican and Chinese teenagers positioned a block away from each other used to be the thing on July 4th. Ammo was available from street sellers up and down Canal St. Police were hands off for the most part until Giuliani cracked down.