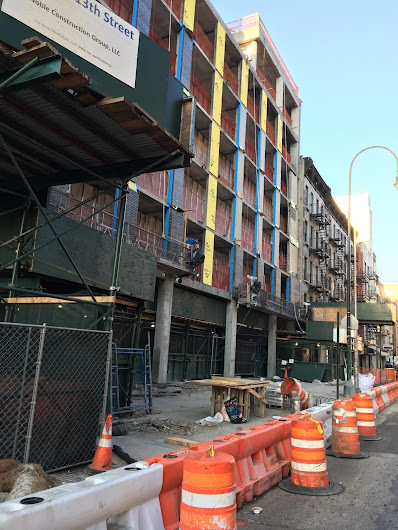 An EVG reader was recently at the Trader Joe's on 14th Street at Irving Place. A store employee told the reader that Trader Joe's is no longer opening an outpost at 432-438 E. 14th St. — the new development in the former Peter Stuyvesant Post Office.

In May 2017, The Real Deal, citing anonymous sources, first reported that Trader Joe's "quietly signed a lease about two months ago with Mack Real Estate and Benenson Capital Partners ... for 8,531 square on the ground floor and 14,170 square feet on the lower level."

Since then, there haven't been any further updates about TJ's arrival here in the base of the 8-story, 114-unit rental at Avenue A.

According to the 14th Street employee, Trader Joe's is opening locations on the Upper West Side and Soho in 2018, and will look for a spot on the Lower East Side. The Trader Joe's newsroom lists the UWS and Soho openings for later this year. There isn't any mention of a second 14th Street outpost. (There's also no mention of the TJ's outpost reported to be coming to Essex Crossing.)

Meanwhile, one block to the east, work continues at the incoming small-format Target store, which will sell, among other things, an assortment of so-called grab-and-go sandwiches, salads and beverages.

Previously on EV Grieve:
Looking at the future home of 14th Street's 2nd Trader Joe's (27 comments)
Posted by Grieve at 4:00 AM

Terrible, was looking forward to it - closer than the original one.

Rumor has it.... I admit I was a little excited about a TJ's so close to my home. Now it's time to ponder what will take that large commercial space, another market, a mega Petco, or some dreadful suburban chain which all my new neighbors will not only have heard of but be excited about. My pet a dog focused supermarket to address the explosion of canine residents of recent years.

I had heard this as well, but was hoping and praying it was not true. Why would TJ's corporates pass up an opportunity like this?!?

Heard it was going to be a home depot?

Good. Don't we have enough millennial crap in our neighborhood?

TJ's was outbid for the space by Home Depot.

Having a hard time seeing what will go into this space, seeing as most people have stuff delivered now, particularly when it comes to stuff like pet-food, etc. A Whole Foods? Amazon no-worker-bee store?

how about a yacht dealership, or a furrier, or an ironmonger?

I doubt a Home Depot due the comparative low population density of the neighborhood. The other HDs in Chelsea and the UES make more sense but who knows what the overlords have for plans.

Trader Joe’s, Home Depot, Target. What’s the difference? This neighborhood used to be Bohemian and interesting. It’s becoming the suburbs more and more with each passing month. If I were a young person today looking for a place to move to where creative and inspiring things are going on the East Village wouldn’t even cross my mind. Same thing for the Lower East Side. And it’s sad really because NYC used to be the place where the creative “outcasts” amongst us went to escape from all this kind of stuff. The sameness and conformity of the suburbs. NYC was never an easy place to survive let alone make it in your chosen field. But at least it was exciting and different.

I hope it is not a home depot - they are owned by an evil Trump supporter.

Like most places it has its downsides, but I still enjoy living in the neighborhood very much.

They need to get a Key foods up in that piece! Deals for days yo.

10:05 AM
TJ's has been around since the 1970s, so wouldn't quite call it millennial.
Bur enjoy your PepsiCo, Kraft-Heinz, Cargill slime.

How about another CVS or another bank? We need one of each every 20 feet. Just to be safe.

Why not open a froyo shop?

Or the way things have been going, another noodle shop for the East Asian Village.

Holy shit. What's with the deluge of negativity and cynicism on here? Jesus. Not one person has something positive to offer or say. No one died. And yes, people. Things change around us. Including we as people. Adapt. Shut up and be grateful you're alive.

Honestly though, who can afford the retail rents in the city anymore besides corporate chains and people with wealthy backers (i.e. rich kids)? All the great cheap little restaurants in the neighborhood have basically been driven out and are being replaced by often good but much more expensive places. And it’s like everytime I walk down the street I see another place that’s gone.

I suppose all of these “old” places were once the new places. I’m sure people that lived in the EV in the 70s and 80s hated the kids that stared moving in in the late 80s and 90s but it just seems different now somehow.

oh the irony. 5:17 telling us to be positive with a blast of negativity.

Home Depot sounds good too, not as good as TJ - but handy and closer.
Home Depot will also not hurt Associated.

How about bringing back Woolworths !

an assortment of so-called grab-and-go sandwiches, salads and beverages.

Which you can find at any Duane Reade. I'm not a fan of this grab-and-go prepared food, which probably all comes from the same warehouse in New Jersey.

How about bringing back Woolworths!

You mean FootLocker™; the last remains of the Woolworth chain are only FootLocker™ stores.

This is a really big space and unless it is divvied up we should expect a corporate chain business here. Home Depot would do badly here unless they follow Target and sell "grab and go" food.

5:17 check the URL again. It's called "evgrieve" not "evyay" or "evfun" or whatever. This site fulfills many a function and its not all about doom and gloom, but a central theme here is the disappearing of our beloved neighborhood. Give people a break if they are upset by news of what's going on around. Don't try to be the thought police.

I like TJ's and everything, but screw you TJ. Come, or don't come. Stop trying to string people along. If they don't end up coming to 14th, boo-hoo, we'll just have to make do with the other TJ's on 14th, or the TJ's on 6th Ave, or the one up in Kips Bay. Would've been nice sure, but we'll pick up the pieces somehow and carry on with life.

Anyways I am not ready to give credibility to some nameless "TJ's employee". The last "scoop" I got straight from a "TJ's employee" was "Hey man, you gotta try the "Simpler Times" beer! It's really good!"

Thank you. Arguably the best comment on I've read on Evgrieve

TJ is coming. Heard from a very reliable source that they signed a lease and are awaiting landlord to complete their portion of the work before they start their own build out. "Some employee @ 14th street said"? Seriously? When was the last time that a national corporation shared their future development plans with their hourly employees?