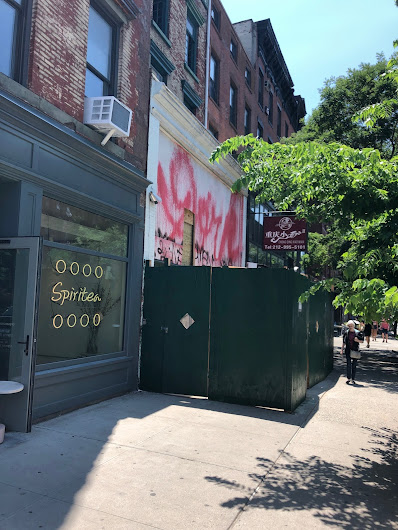 The plywood recently arrived outside 84 Second Ave. ... marking the beginning of the renovation phase here between Fourth Street and Fifth Street.

There are now approved work permits on file with the city for this address, including "a horizontal enlargement at the rear of the building."

This 5-floor building has been the subject of much curiosity and speculation through the years.

Here's a quick recap of the permitting required to renovate the building.

Last July, the newish owners of the currently-empty building, reportedly Highpoint Property Group, a real-estate development company, appeared before CB3's Landmarks Committee for a proposal on a Certificate of Appropriateness for the address. (Landlords of buildings located within a designated New York City historic district must receive a permit from the Landmarks Preservation Commission for major work.)

According to the alteration permits filed with the city, the additions would take the building from its current 5,829 square feet to 8,439 total square feet with a rear-yard addition. The modified No. 84 would feature new retail space as well as four residences.

As for that July 2018 meeting, CB3 conditionally approved the front façade plan only if the trapezoidal storefront window could be retained. CB3 opposed the rear-yard addition. According to the minutes from that meeting, neighbors submitted a petition against the proposal containing 160 signatures.

In late October, the LPC voted to approve the proposal to modify and replace the storefront and construct additions out back and on the roof. Per the LPC: "[I]n voting to approve this proposal, the Commission stipulated that the applicant work with the Commission's staff to reduce the visibility of the rooftop work from public thoroughfares. No work may begin until a Certificate of Appropriateness has been issued. Upon receipt, review and approval of two signed and sealed sets of the final Department of Buildings filing drawings for the approved work, a Certificate of Appropriateness will be issued."

Apparently all this work received the proper blessing along the way, as the permits show.

This property has changed hands twice in recent years. Highpoint bought the building for $7.8 million in the spring of 2018. According to public records, the building sold in May 2016 for $5.1 million. Betty Sopolsky via an LLC was the seller, with the buyer listed as West 26th Street LLC.

There are new plans to expand the mysterious 84 2nd Ave.
Posted by Grieve at 4:15 AM

I wonder if the LPC will EVER take the side of the 99%, who are most impacted by their consistent and continued refusal to landmark buildings that are important to us and to our neighborhoods, rather than to the developers who continue to steamroller over history in their pursuit for ever greater profit?

There's nothing in this building to Landmark. It was the site of an unresolved tragedy. That's it.

IMO this building should be razed. Its horrible history seems like a massive impediment to its commercial viability.

You do realize that once a building is landmarked you can pretty much forget about any renovations to the building. A landmarking designation in a mom and pop building basically means they will sell it to a developer who will wait it out for more favorable laws and conditions for development. There are unintended consequences to everything. Why exactly do you think most landmarked buildings are not being upgraded or painted? The primary reason is the endless red tape required for the owner to get approval as to what type of paint, what type of materials and what color one can use on their property. Most decide to either sell or just not do anything to upgrade their properties. There are two sides to every story.

This is the most productive the ghosts have been in ages! Can’t wait to see what they have in store for the new owners!

Had a friend who lived on the 2nd floor in a windowless room in late 1980 early '81. She then moved to LA, but the curse followed her. as she committed suicide at age 25.

Speaking of landmarking, today I took a lamp to Bulb Conceptss at 13 E. 7th Street to be repaired. The fellow who repaired it did a nice job and it's working now. I took a business card, which says Frontline Lighting Inc. He told me the previous owner sold the business in December last year and decamped to California. So why does the sign on the store front say Bulb Concepts and not Frontline Lighting, I inquired. Because... drum roll...the Landmarkers will not allow the sign to be changed. Can you believe it?

Think I'll ask Strand's owner if she might do a change to her store front without getting Big Brother's permission, and sue them all the way up to the Supreme Court if they follow along with the communist line on property rights.

The current owners knew they were buying a building in a historic district and all the red tape that comes with it.

Get rid of the historic district designation and the red commie tape.