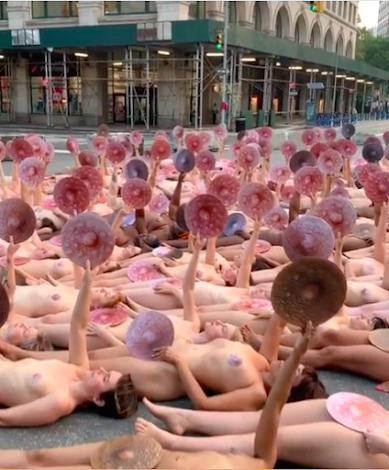 Tunick has joined forces with the National Coalition Against Censorship for a project called #WeTheNipple. As artnet noted last month, "the effort is a direct challenge to Facebook and Instagram’s community guidelines, which prohibit nudity, regardless of artistic merit."

Tunick, who has organized and photographed more than 120 large groups of nude people around the world, has been at odds with the two social media platforms in recent years.

As he told Esquire in April:

"I get it. I don’t want my daughters on an Instagram full of pornography. But there has to be a way artists can have a voice to show their works. There has to be some formula, whether it’s the YouTube way where you’re reviewed and there’s an 18-or-older button that’s pressed. Or, for starters, equalize the male and female nipple and not deem the female nipple as violent."

And this morning on Astor Place, Tunick and between 100 to 200 nude models gathered to send a message to Facebook, who has offices at 770 Broadway (somewhere above the Kmart!).

"These are all male nipple stickers covering female presenting nipples and male nipple cards covering all the participant’s genitalia. There is no reason for Facebook or Instagram to censor this video or block from hashtags."

#WeTheNipple Art Action in front of @Facebook and @Instagram offices this Morning. #StopCensorship These are all male nipple stickers covering female presenting nipples and male nipple cards covering all the participant’s genitalia. There is no reason for Facebook or Instagram to censor this video or block from hashtags. @NCACensorship @chadsmithofficial @bravoandy @pagmi #AndresSerrano @theadamgoldberg @RonKuby #FuckCensorship Link in Bio.

Here's some more coverage of the action (thanks Daniel!)... 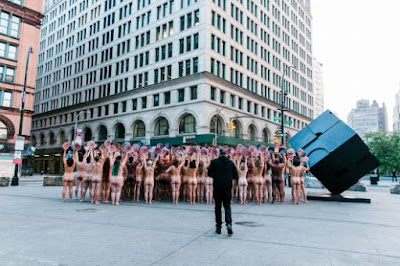 Just wondering , but how about doing a #wethedick ? FYI thanks to Ron Kuby establishing a legal precedent in State Supreme Court even though social media blocks "art" like this at least you cannot be arrested for doing it. If he did a #wethedick however that would be illegal.

Spencer how do you only manage to get women who all seem to be in very good physical shape to do a mass topless photoshoot like this ? Nobody overweight, disabled or not physically unattractive? Censorship or just the luck of the draw ?

I was one of the models. @12:34 I would say your perception is inaccurate. There were many various body types there. But I have no idea of his selection process.

It was an enjoyable and interesting experience. Last time I posed for him in NYC it was the Giuliani era, and there was a real threat of arrest. So, some progress has been made in regards to acceptance of nudity.

To be fair, it's more or less who shows up for his shoots and/or if he's going for a specific theme. He does not seem to discriminate. His past photoshoots have had women and men of various body types, from large to small. The one constant I have seen since the beginning is that the people who participate are mostly Caucasian.

As to their bodies' attractiveness, that's totally subjective.

this art / statement is annoying.

Spencer Tunick is just Ugly George with a better camera.

at 10:03: What IS annoying is the ceaseless, chaotic honkathon on 2nd Ave. every weekend night (that includes Thursday night!). I can at least read or sleep thru "art".

There is starvation and violence all over the world.
There is plastic, garbage destroying the environment and irreversible climate change.
Closer to home in NYC, there are plenty of people who are suffering - homeless, abused children etc.

And on the political front, the president of the U.S. with others is successfully wrecking the future probably permanently.

So incredulous and depressed at the number of people who consider this issue important.

If only the participants would put the same time and energy into voting or helping someone who is actually suffering.

I am waiting for the Nipple Pub Crawl.