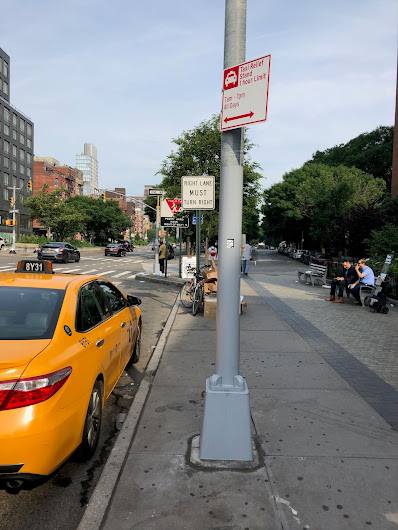 With the arrival of the new M14 SBS route today comes another important change: The arrival at long last of a taxi relief stand on Houston Street as well as on First Street between Avenue A and First Avenue... 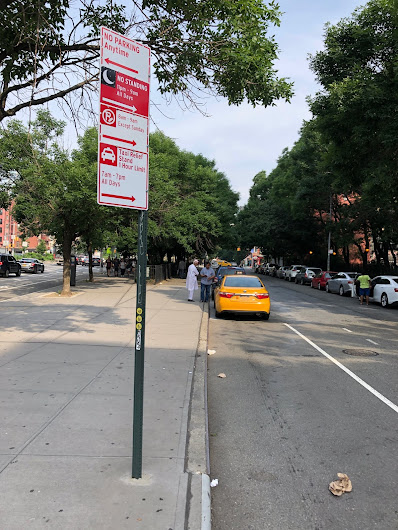 For a little history... the never-ending East Houston Reconstruction Project finally wrapped up at the end of 2018 — just six years behind schedule.

For nearly nine years, the construction zone eliminated parking spaces for cab drivers, who are a sizable share of Punjabi Grocery & Deli's business here at 114 E. First St., rendering it nearly impossible for them to stop in for a meal or break. Those who did stop faced getting a ticket. 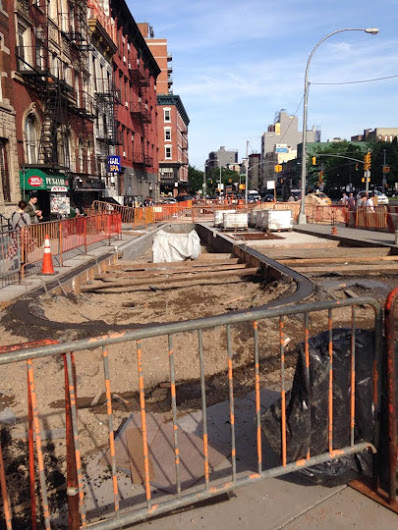 Community members came together in 2014 ... and later in 2015 to petition Community Board 3 and the city for an interim taxi relief stand. (The taxi relief stand was inexplicably some hot-potato issue among various city agencies at the time.)

The temporary taxi relief stand finally arrived on Avenue A between Second Street and Houston in June 2015. That spot on First Avenue outside the Library and Boulton & Watt is, as of today, now an M14A stop.

Now, hopefully, the First Street taxi relief stand will be here to stay — at least until construction picks up next door at 118 First Ave., where a 9-story residential building (with ground-floor retail) is in the works.

Concern again for Punjabi Grocery & Deli on 1st Street
Posted by Grieve at 4:20 AM

This is long overdue great news.

It's nice to see the city doing the right thing! On another note, with the Houston St. project taking six years longer than originally scheduled, what does this portend for the plan to shut down the East River park for 3.5 years?

@9:58am: Don't worry about the East River Park; none of us will live long enough to see it actually re-open.

We need a taxi relief stand on 2nd St between Av A and 1st Av. There are 8-10 double parked vehicles in front of TLC cafe. Every day.