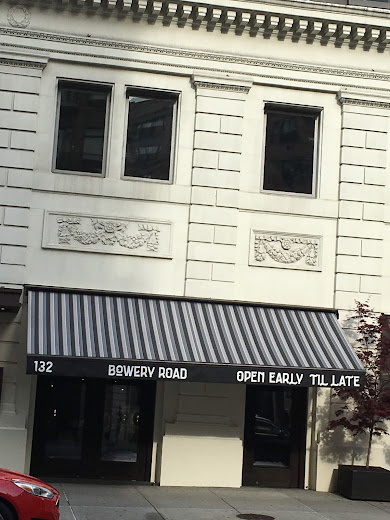 Here's more about it:

Gather at Bowery Road, a neighborhood American restaurant. Chef Ron Rosselli's flavorful and thoughtfully prepared dishes are inspired by long relationships with local farmers and purveyors and loaded with seasonal produce from the Union Square Greenmarket. The restaurant takes its name from its location on 4th Avenue, which was formerly called Bowery Road when it served as the pathway to Peter Stuyvesant's farm.

Located directly off the lobby, Bowery Road is open from 7am-11pm for breakfast, lunch, dinner and weekend brunch.

Rosselli has also worked at Locanda Verde and The Standard Grill.

The hotel now also sports The Library of Distilled Spirits, which: "pays tribute to liquor makers and their craft with over 700 bottles made around the world. Explore the collection neat, or shaken and stirred into more than 150 classic cocktails. Barkeepers and encyclopedic volumes of single spirits will help you choose."

As previously noted, The Fourth and Singl, the hotel's two dining-drinking options, had closed. Marco Moreira and Jo-Ann Makovitzky, the restaurateurs behind these two as well as a third Hyatt space, Botequim, reportedly parted ways with the hotel last spring.

The two new establishments are operated by APICII, "a multi-concept restaurant company."

Previously on EV Grieve:
Slim dining options at the Hyatt Union Square for the time being
Posted by Grieve at 4:01 AM

"pays tribute to liquor makers and their craft with over 700 bottles made around the world. Explore the collection neat, or shaken and stirred into more than 150 classic cocktails. Barkeepers and encyclopedic volumes of single spirits will help you choose."

Just a taste of what's to come once the Marriott Moxy hotel development on 11th is done displacing a swath of affordable housing. EVGrieve may have to rebrand to MtSGrieve if this keeps up.

I just can't with this stuff anymore. I will be making a point of seeking out older "restaurant" restaurants as much as possible for my nights out, thanks.

They know they're not on the Bowery, right?

Based on the high failure rate of new businesses on the Bowery, I'm not sure you would want to bring that name into the picture. Anyway, how long before they try putting tables out on that crooked angled sidewalk where all the plates slide off the table?

It's a restaurant and a bar in a hotel - anyone who doesn't know they're going to pay through the nose to eat at a place like that is nuts.

As for the bar, maybe they didn't get the memo: the only thing the drinking crowd around here wants is to get drunk cheap & fast. "Encyclopedic volume of single spirits" misses the point almost completely. They should try "$1 beers" instead.

A little devil's advocate ... to be fair no, they're not on the Bowery, but it says right in the description that Fourth Ave used to be called Bowery Road. And it doesn't actually look very expensive at all. I guess we'll see.

Went tonight as a default choice and it was really lovely. The food was very tasty, service was great (not pretentious or snobby as the description might suggest) and prices were totally reasonable. The room was lively but quiet enough to actually have a conversation. I'm going back soon.