Looking at the BP-replacing condos coming to 32 E. 1st St. 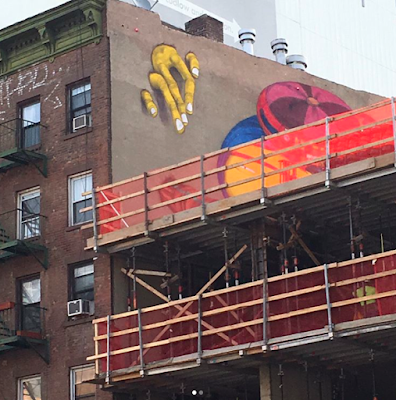 As we noted two weeks ago, the mural by Brazilian twins Os Gêmeos was starting to disappear behind the new 10-story retail-residential building at 24 Second Ave. and First Street.

CityRealty had more details this week about the "spiffy collection of condos" expected to be finished later next year. For starters, the official address of the building housing 33 condos is 32 E. First St.

The lively and geometric exterior is designed by the design firm Combined who is a joint-partnership between RSVP Architecture Studio and N-Plus Design Studio. The façade is composed of stone-colored frames that project from a face of windows and dark-colored spandrels and mullions. 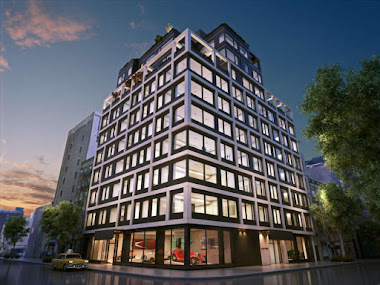 New interior renderings show the forthcoming homes will have open layouts, arrays of windows that are not quite floor-to-ceiling, and beveled ceilings. The amenity offerings will include a fitness center, spa, mail room, communal terrace and a recreation room.

Here are some renderings via Combined. Updated: A rep for Combined said that they did not grant permission for the use of the renderings. So you can check out all the renderings at the Combined website. (Or CityRealty here.)

The property was home to BP, which closed in July 2014. The BP was the second-to-last gas station in the East Village.

2nd Avenue residential complex now complete with renderings on the plywood
Posted by Grieve at 4:18 AM

I can't wait for these rich wankers or idiot secondary rental tenants to bask in this area's taxi and uber horn and traffic cacophony and congrstion friday and saturday night's from 7p - 2a.

This is going to be epic!

Again with the press release written by a drunken chimp. Unless Frank Gehry is designing the building, what else would it be besides geometric? And if that exterior is the scribe's idea of "lively*, I presume they hang out at funerals for fun. Sorry, you're "not quite" readable, honey!

That corner is an absolute parking lot and traffic nightmare every rush hour and all night on weekends. Welcome to the neighborhood!

I predict that in 40 or 50 years, EVG will be writing about these apartments and how they have been subdivided into smaller units and become SRO hotels for the down and out. The history of the Bowery will repeat itself!

I am Google Mapping for subway stations in the area of Bowery and Delancey. Depending on how much I zoom in or out, the Bowery subway station disappears - no name, not even the [M] symbol is displayed, while [M] symbols for stations nearby are displayed. Weird!

I know - very topically drifting, but maybe this can be the basis for another awesome investigative EVG posting?

p.s. The same Google map thing happens with the 3rd Avenue subway station - depending on zoom, it disappears, but nearby stations continue to be displayed! I think Google is trying to stop people from entering or leaving the EV, but not showing public transit access points!

Ever wonder who (if anyone) maintains/cleans swimming pools & spas in boutique buildings like this? I'd sooner swim at NYC public pools.

Their website no longer has anything on it. Suspicious!

Not a prime location. Noise traffic constant digging up of streets.

I predict that in 40 or 50 years, EVG will be writing about these apartments and how they have been subdivided into smaller units and become SRO hotels for the down and out. The history of the Bowery will repeat itself!

We can only hope!

I remember stopping for gas there when it was 60 cents a gallon. The advent of electric cars will make these stations obsolete recharging stations will be the trend from possibly street/sidewalk positions. We need housing and housing for people of means make sense since 90 per cent of the personal income tax collected is paid by 20 per cent of the city residents. Luxury housing brings people that pay those taxes.Basically need people to pull that wagon of government benefits so others can ride in it for a lifetime. So luxury housing gets a bad rap...besides the restroom at that station was always locked...clientele mostly not buying gas in fact did not have cars no most time just riding in the wagon.

I don't understand why people comment on the architecture at all, it's that it's more luxury housing. These are the kind of buildings developers build in this day and age. Gehry is not the only architect doing interesting buildings. He did a residential on Beeckman Street and it's market rate rentals. The late great architect, Zaha Hadid, did an outrageous residential building in the meatpacking. Koolhaas is doing a residential condo building on E 22nd Street. And he did the design for an Ian Schrager hotel on Astor place but it fell apart. These are all luxury developments. Pretty soon we're going to be like Hong Kong or Dubai.

This new rendering shows a luxury car retailer in the bottom floor. Is that just for show? Any word on what will be in the lower level?