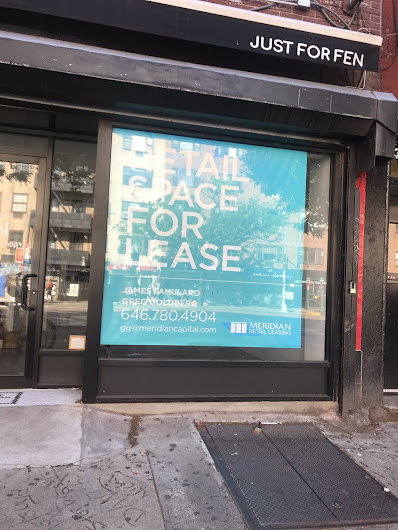 That's all for Just For Fen on First Avenue between 13th Street and 14th Street.

A for-rent sign now hangs in the window of the former quick-serve restaurant, which opened in September 2017 and served a variety of Guizhou-style fen bowls.

No word on why they closed. One day they were gone. Of course, there's no shortage of places serving rice noodles in the area, including the acclaimed Little Tong two blocks to the south.

Before Just For Fen, three quick-serve restaurants quickly came and went at this location in three years — Bago ... Hibachi Dumpling Express ... and 2 Bros.

Previously on EV Grieve:
Just For Fen opens on 1st Avenue
Posted by Grieve at 4:10 AM

Email ThisBlogThis!Share to TwitterShare to FacebookShare to Pinterest
Labels: closings 2019, Just for Fen

That's too bad; their food was tasty.

Their food was shockingly good. But absolutely no one seemed to go there, get delivery from there, or know about it. Maybe the odd name was off-putting? Too bad.

Strange name that conveyed nothing to the consumer; odd menu that featured rice noodles (I'm not going to live on rice noodles; prefer soba). They did not seem to know how to market themselves in a somewhat saturated-with-noodle-places market.

Too bad they couldn't make it, but I suspect some places open more on a whim (an expensive whim, to be sure!), rather than based on an actual/factual understanding of the market (i.e., foot traffic & nearby competitors).

their spicy pork wontons were literally the best I've had... perfect texture, handmade tender wonton wrappers, spicy tangy sauce... I would order dozens of just those... and I felt it was too good to be true and they would go away... and now they are truly gone. ugh. one of the great small injustices of life....

Mediocre at best and pricier than Mee Noodle down the block. If you are opening a noodle place now, make sure you are better than the competition next door.