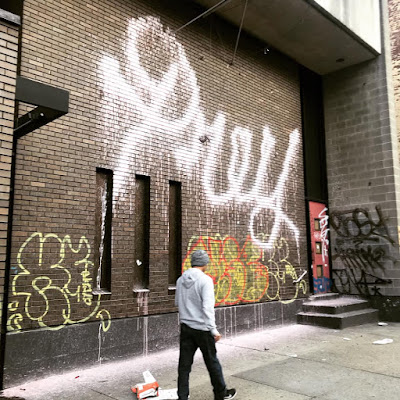 Rumors started late last year that the Archdiocese of New York had sold the former Church of the Nativity on Second Avenue between Second Street and Third Street for use as luxury housing. (There's nothing in public records yet to confirm the rumors.)

This afternoon at 3, the Cooper Square Committee and the Nativity Committee are holding a rally in front of the property at 44 Second Ave. ... per the flyers, "the $40 million sale of the Nativity Church/Rectory is coming." 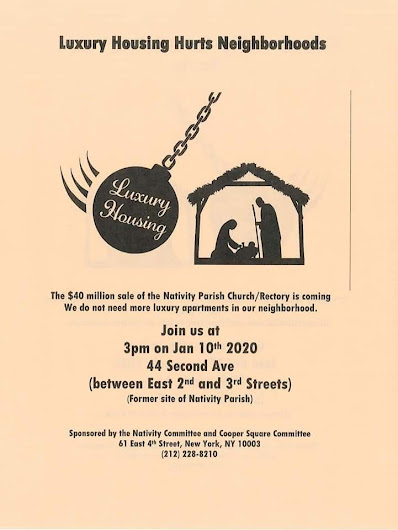 The Church closed after a service on July 31, 2015, merging with Most Holy Redeemer on Third Street.

However, the Archdiocese of New York reportedly didn't seem too keen on that idea, perhaps intent on garnering top dollar for the prime real estate for luxury housing.

In April 2019, Catholic Homes New York, the affordable housing unit of Catholic Charities and the Archdiocese of New York, announced plans to redevelop several existing properties to provide 2,000 affordable units in NYC over the next 10 years. Not on the affordable-housing list: Church of the Nativity and the Church of Saint Emeric on 13th Street near Avenue D.

This wouldn't be the first time that a former Catholic church was demolished for upscale housing in this neighborhood. Developer Douglas Steiner bought the former Mary Help of Christians property in 2012 from the Archdiocese of New York for $41 million.

During the summer of 2013, workers demolished the church, school and rectory to make way for Steiner East Village, the block-long condoplex where a penthouse unit is currently renting for $19,000 per month.

The Archdiocese has allowed the church to become a blight on the neighborhood. What a disgrace. Hopefully construction starts soon

Absolutely correct that the Archdiocese has allowed the church to become a blight on the neighborhood. Obscene that they are allowed to do so. Also obscene that they are not using it to provide low or even "middle class" income housing in a neighborhood and city that badly needs it. Catholic church needs to reexamine its mission. Thought they were NOT supposed to be just another predatory, capitalist speculator and help communities, not destroy them. Hypocrites, Jesus weeps.

How many decades did the Catholic Church not pay a penny of real estate tax on its vast holdings?
They won't pay a penny on the sale of this property either.

Dibs on its air space, or will the Archdiocese demand sky-high (no pun intended) for it since they'll claim the air-space is a stairway to heaven and heavenly?