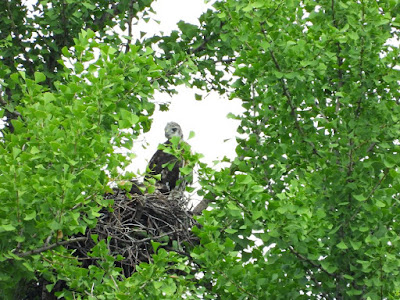 [Photo from May 31 by @couplewithoutborders]

Amelia and Christo's second chick, who had fallen ill in recent days, died on Sunday.

Early Saturday morning, the chick fell from the nest, landing in the under-renovation playground in the southeast portion of Tompkins Square Park.

A reader shared this photo as help was on its way. 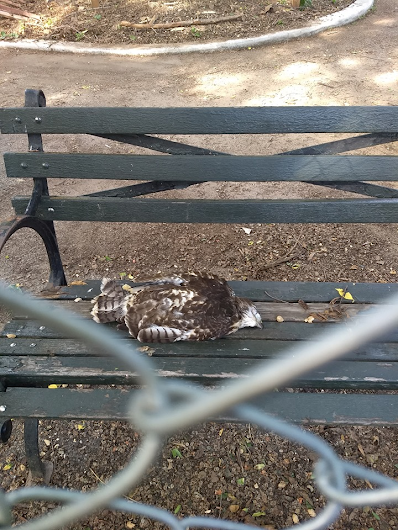 As Goggla reported, Ranger Rob (aka Rob Mastrianni, a Manhattan Ranger supervisor who lives in the East Village), retrieved the stricken nestling and transported it to the Animal Medical Center.

On Saturday night, the chick was transferred to Wildlife In Need of Rescue and Rehabilitation (WINORR) on Long Island. Unfortunately, "its illness/injuries were just too advanced," Goggla reported.

In late May, this chick's sibling also died. In the past two years, Amelia and Christo have lost three of their four offspring.

It's not known at this time what killed the chicks this year. Per Goggla: "The remains will be sent to the New York State Department of Environmental Conservation (NYSDEC) for testing to determine the cause of illness and death."

Last year, the chick died from a combination of rodenticide and West Nile virus.

In more positive hawklet news, the three chicks in Washington Square Park have fledged. Roger Paw has you covered with their activities at this link.
Posted by Grieve at 4:30 AM

Too sad. Rodenticide is lethal and, well, just Damn.

That 2nd photo breaks my heart. What a devastating season.

Unfortunately rats will outlive us all and our attempts to control them are failing. Poison does not discriminate from one life form or another, it was designed to kill anything that has the misfortune of ingesting it.

The city should really focus on alternatives to poisoning our environments. How about using some of the 1.5 billions dollars aimed at making the E River Park into De Blasio's gift to luxury housing developers into research and a sincere effort to heavily reduce the rat population. Perhaps once Manhattan become a gated community the rat extinction will begin.

I thought they were using dry ice now in the park. If it was a poison it could have come from anywhere. If so then you can't blame the city so easily, though blaming De Blasio for anything is fine in my book.

Two words: Rat Zapper. Look it up on Amazon. It uses batteries & gives an electric jolt to kill rats instantly.

It is a shame but Tompkins Square park is over run with rats. I hang out in the park in the evening and you see the rats running all over the place. Part of the problem is the picnickers who leave a lot of trash on the grass and don't pick up after themselves when they are done and another problem is the garbage cans that are not emptied out quick enough by the Sanitation Dept. and are overflowing with garbage that falls in a pile on the ground next to the cans which appears to be most of the time which gives the rats a constant source of food.