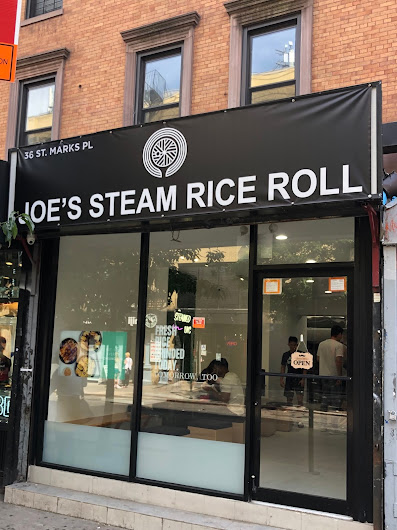 This is the third NYC outpost of the popular quick-serve establishment, which got its start in Flushing where owner Joe Rong has apparently perfected the art of the rice roll — known as cheung fun in Cantonese.

Per the cooking site Taste:

With a steaming machine imported from Guangzhou specifically used to make cheung fun, Rong makes each dish to order, so texture is never compromised. And similar to street vendors throughout Guangdong province, you get to choose what goes inside, like ground pork, barbecue beef, or dried shrimp, and extras that get mixed into the slurry of rice flour batter, including a cracked egg, corn, cilantro, and scallion.

No. 36 has seen a variety of food concepts come and go of late, most recently Cheers Cut, the Taiwanese mini-chain of fried foods.

Previously on EV Grieve:
Joe’s Steam Rice Roll puts up the signage on St. Mark's Place
Posted by Grieve at 4:08 AM

I never thought much about rice rolls but these are in a league of their own.