Signage is up for Auriga Cafe on Avenue A 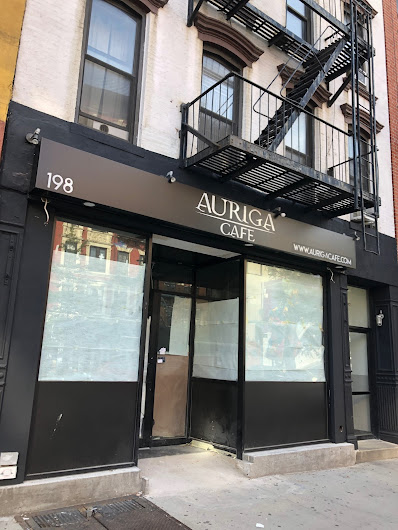 Auriga Cafe took another step toward an opening date with the arrival this past week of their storefront signage here at 198 Avenue A between 12th Street and 13th Street.

As previously noted, David Duran, who runs El Camion a storefront away on the corner at 12th Street, is behind this new venture.

No word just yet on particulars, such as menu items. (The website doesn't appear to be up and running yet.)

Previously on EV Grieve:
Auriga Cafe announces itself on Avenue A
Posted by Grieve at 4:03 AM

Not too attractive of a storefront however I am grateful it does not have an open facade like all those loud bars a block away.

All traces of Empire Biscuit gone now? Man their facade looked so freakin fancy and expensive. What a colossal waste.